Posted on April 8, 2015 by Subterranean Cinema

About a decade ago, for my original “Subterranean Cinema” site, I created an internet version of the classic Amos Vogel book, “Film as a Subversive Art”. Ive located a site online with a PDF version of my adaption! It is also available thru Bittorrent, but you can download it directly here.

Posted on January 20, 2015 by Subterranean Cinema

I was born in 1963, and in addition to being a film fan for most of that span of time, I have also been a list fan. I loved “The Book of Lists” (and it’s sequels) in the 70s and 80s, and I have had a set of “Best Film” lists that I created for every year going back to 1960, which I have updated when I have seen new films and added them, changed my mind about older films that I used to think were good (and vice versa on older ones that I used to think were bad), etc. Now, I have put those lists online on two websites, “Letterboxd” and “Mubi”, and I have also put them “into print”, in PDF format, for easy reading. This is the “Subterranean Book of Film Lists”. Hope you enjoy it!  🙂

COMING SOON – an updated version going back to the year 1900!

Posted on January 20, 2015 by Subterranean Cinema

Posted on September 5, 2014 by Subterranean Cinema 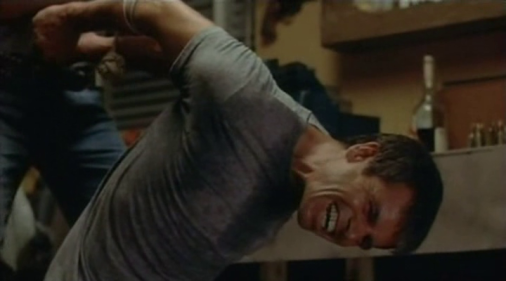 Rolling Thunder (1977) is a cult classic, directed by John Flynn, and starring William Devane (Charles Rane) and Tommy Lee Jones (Johnny Vohden) as two POWs who return home after seven years of horrific captivity in a Vietnamese prison camp. When Rane’s wife and child are murdered by a group of thugs in a home invasion robbery (which also costs him one of his hands that he has replaced with a steel hook), he tracks them down and, with the help of Vohden, he goes on a murderous rampage of revenge against them in a seedy Mexican brothel.

The screenplay was originally written by Paul Schrader, with a violent ending obviously influenced by the final scenes of “Taxi Driver” (in fact, Travis Bickle makes a tongue-in-cheek cameo appearance in the script, watching a porno film at a drive in!) Intended as a “metaphor for the American racism in Vietnam”, the Schrader version was about (in the author’s words) “a Texas trash racist who had become a war hero without ever having fired a gun”, and it ended not only with Rane killing dozens of Mexicans (guilty and innocent), but also with Rane’s death. These elements were changed by the filmmakers and screenwriter Heywood Gould, without participation by Schrader, and he disapproved of the final film. Quentin Tarantino has said that “Rolling Thunder” is his alltime favorite movie, to the extent that he named a distribution company after it.

Should they have used Schrader’s version? Read this and decide for yourself.

El Topo – A Book of the Film

Posted on August 10, 2014 by Subterranean Cinema

This is a PDF version of the web adaption that I created for my original “Subterranean Cinema” website, with the complete text of the book + all images contained in it.  I located this PDF on a very obscure Russian website, with a server so bad that it was barely downloadable. So, I am very glad to be making it easily available to everyone again!

Included at the end of it is my transcription of a 1970 Penthouse interview with Jodorowsky. His footnoted interpretations of the film are sprinkled throughout the narrative, and are in brackets and red print. Enjoy!

El Topo – A Book of the Film

Posted on August 1, 2014 by Subterranean Cinema

In the tragic history of maltreated cinema, I can think of no worse example than the 1994 film by Bill Forsyth, “Being Human”.  The director of “Gregory’s Girl” and “Local Hero” wrote a fantastic screenplay about the gentle soul of a simple man’s journey thru the ages, seeking happiness, love, and peace. Unfortunately, the vapid suits at Warner Brothers (already infamous in my eyes for their quashing of George Romero’s “The Stand”, the screenplay of which is also available for viewing on this site) didn’t understand his vision, so they forced him to slash over 40 minutes from the film, and to add one of the worst narration tracks ever (by Theresa Russell) in a pathetic attempt to explain to the audience what they felt was necessary to keep them tuned in and “understanding” what was going on.  This faux narration completely ruins the theatrical print of the film: it’s like having a mentally unbalanced woman sitting next to you in the theatre, talking happily back to the screen, until you want to take your popcorn box and shove it down her throat to shut her up. Forsyth rightly disowned the film, which got almost universally negative reviews, and with the exception of a “sequel” to “Gregory’s Girl” in 1999, he never made another film, because of his deep disillusionment.

Fortunately, the original screenplay still exists, and here it is.

This is a “fan edit” created by Stephen Dorian Kutos, which removes all of the terrible narration from the soundtrack, bringing the film much closer to Forsyth’s original vision, and it improves the film’s quality immeasurably.

This is one of the most infamous scripts in the history of Hollywood.

I think it is a very funny screenplay that would have been a good vehicle for Sam Kinison, who it was obviously adapted for (the numerous “Oh! Oh!” exclamations throughout being the most obvious indicator).

The script is infamous for supposedly being “cursed” and partly responsible for the deaths of several major comedic actors in the 1980s and 1990s.  The “Atuk Curse” has become one of the better known “urban legends” in Hollywood.  It’s first victim, supposedly, was John Belushi, who had read the script and was reportedly enthusiastic about taking on the role of Atuk in 1982.  Shortly afterwards, he was found dead of a drug overdose.

Years later, the part was offered to comedian Sam Kinison, who accepted it in 1988.  The version shown on this site is the final shooting script which was used on the first (and last) day of shooting on the film.  Christopher Walken and Ben Affleck were also cast in it. Kinison filmed at least one scene for the film before he grew dissatisfied with the script, and he demanded that parts of it be re-written on the spot, halting production.  He left the set in disgust and refused to return, and the production company filed a lawsuit against him which was a large part of what made him financially destitute when it was settled a couple of years later.  Not long after that, while talks were underway for him to continue the project and finish the film, Kinison died in a car crash in the Nevada desert.

The curse supposedly struck again in 1994, when John Candy, who had been approached for the role of Atuk, was allegedly reading the script when he suddenly died of a heart attack on March 4th (the day before the 12th anniversary of Belushi’s death).  It was around this point in the production’s history that the press began to speak of a “curse”. Some believe that the curse struck twice that year, since in November, Michael O’Donoghue died of a cerebral hemorrhage.  O’Donoghue was a writer / comedian who was also a friend of Belushi and Kinison and, the story goes, had read the script (in some version of the tale they even worked on it together) before recommending it to both of them.

The final victim of the “Atuk curse”, to date, was said to be Chris Farley, who idolized John Belushi.  Like his idol, he was up for the role of Atuk, and was allegedly about to accept it when, also like his idol, he died of a drug overdose in December of 1997.  According to some versions, the curse would strike twice more, only six months later in May 1998, when Farley’s friend and former Saturday Night Live cast-mate, Phil Hartman, was murdered by his wife.  Farley is said to have shown the “Atuk” script to Hartman, before his death, and was encouraging him to take a co-starring role (possibly that of McKuen).

Special thanks to my friend Julian DiLorenzo for tracking this classic bit of lost cinematic history down!